If you prefer video tutorials, check out this Youtube link: https://youtu.be/batZUAX-2hY

What are Buckets for?

If you want to automate adding prospects to a campaign on specific days and times, you should start with setting up Buckets.

Note:  Here's a step by step guide on How to Schedule Campaigns

How do buckets work?

Buckets are where prospects must be added first. Prospects will get pulled out from the bucket based on the Schedules to automatically add them to the campaign.

Note that a prospect can only be added to one bucket at a time. Adding prospects to another bucket will remove them from the previous bucket.

How to create a Bucket?

There are two ways to create a Bucket:

1.  Create a bucket on the Campaigns page
First way of creating a bucket is by heading to Campaigns → Buckets → click Create new Bucket. 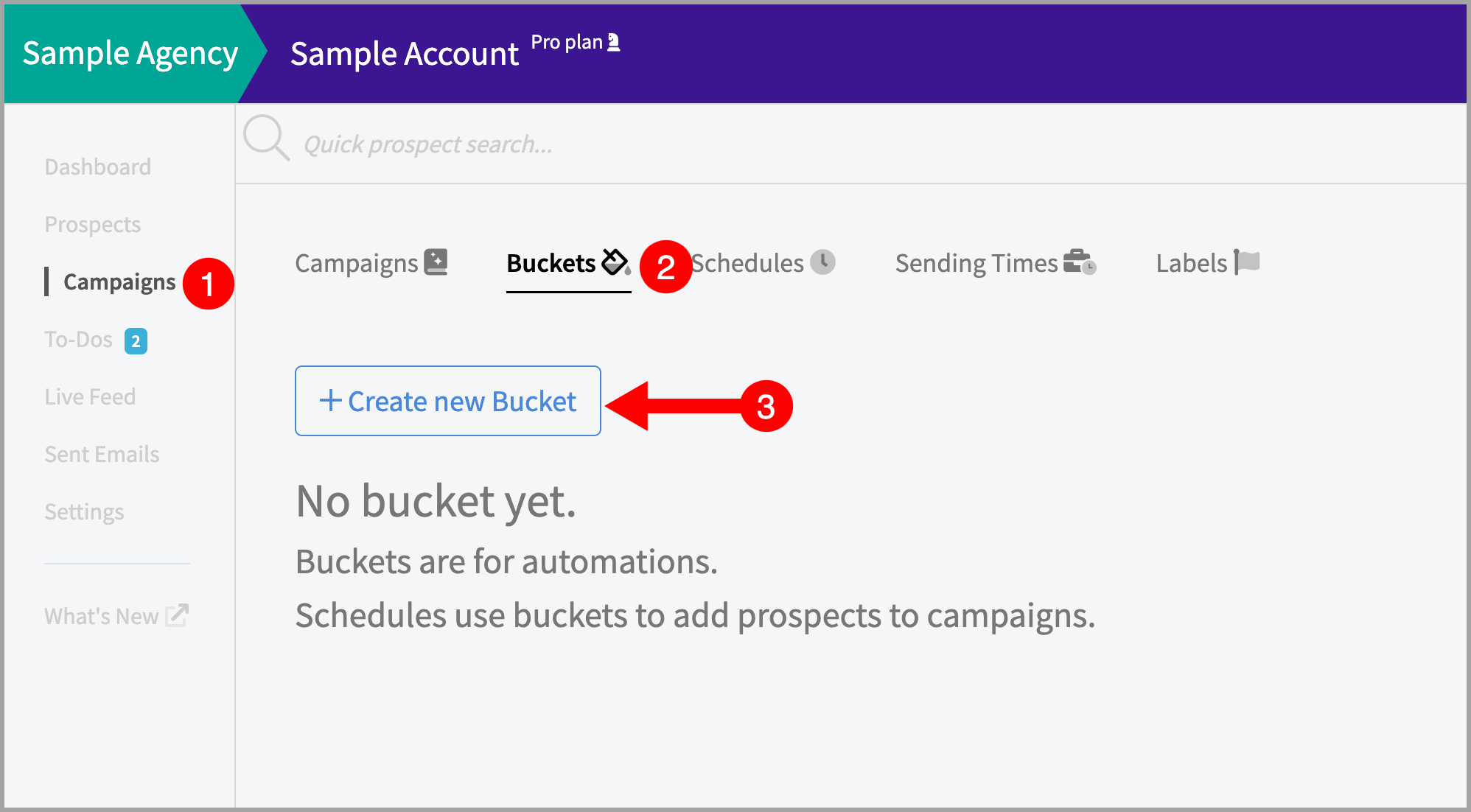 Name the bucket and check the boxes based on your preferred settings. 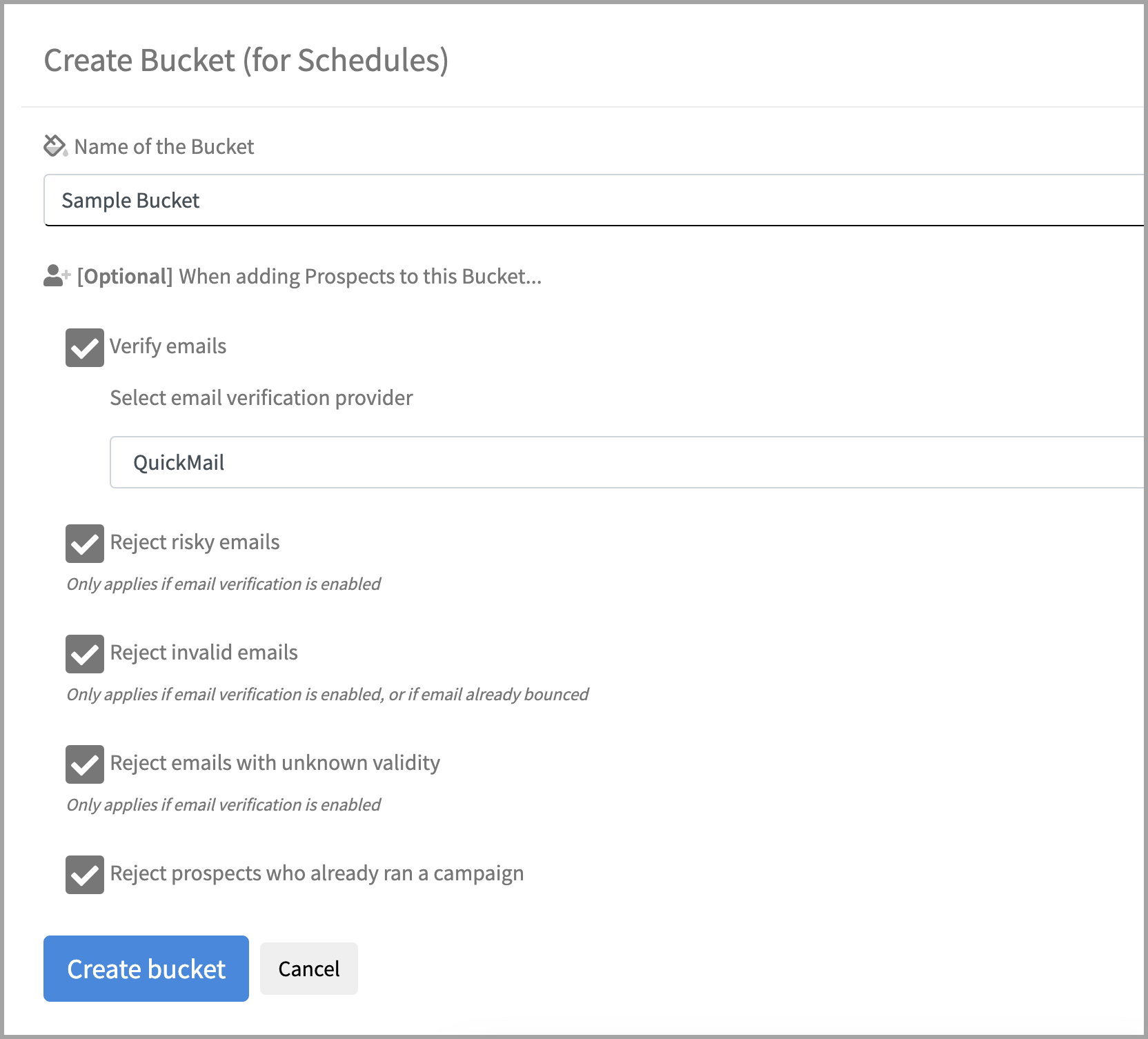 2. Creating a bucket upon import

To create a bucket upon import, create an import → click the plus sign (+) in the Bucket section 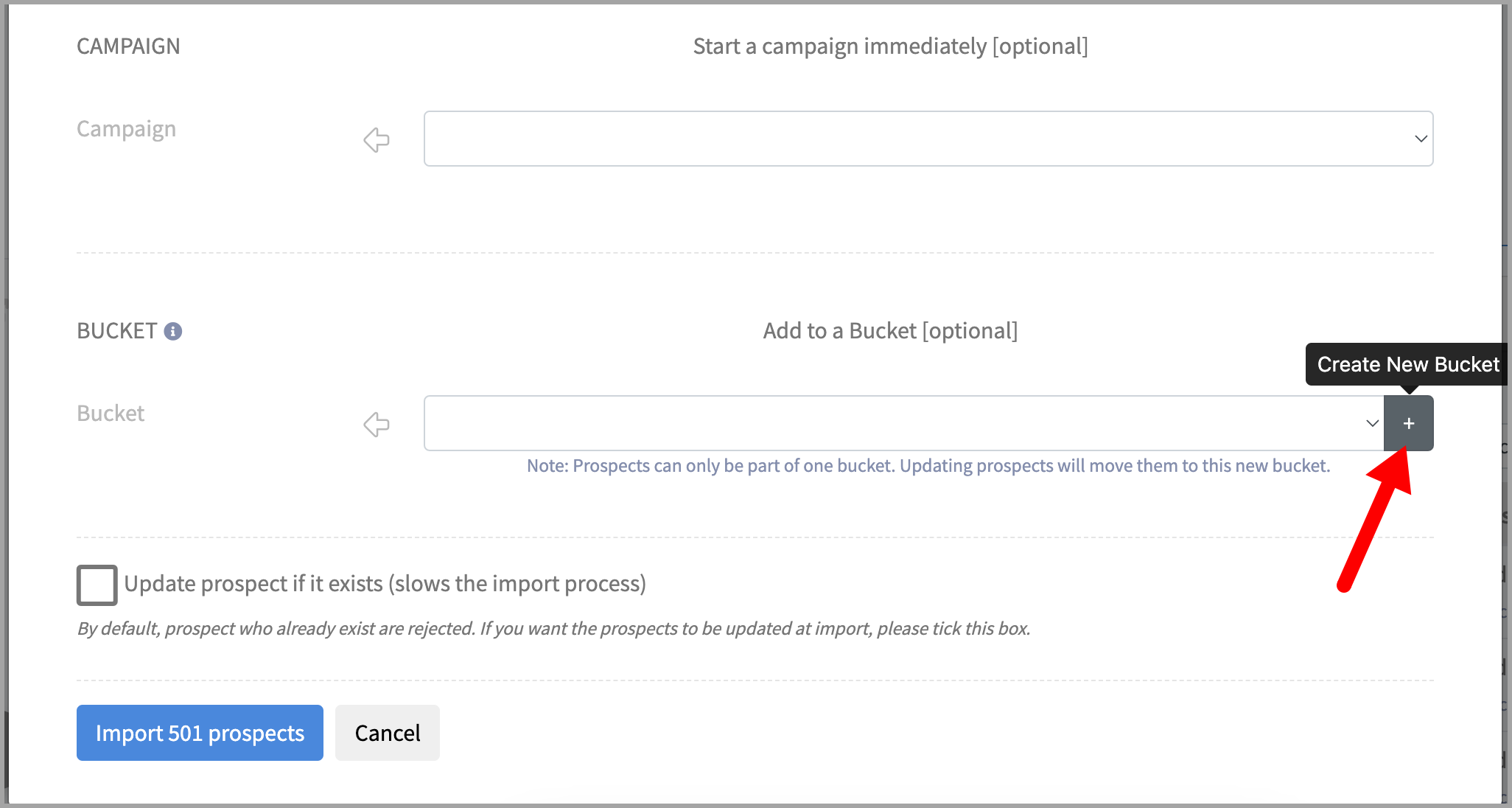 What do those checkboxes mean?

How to add Prospects to a Bucket?

Prospects can be added to a Bucket in two ways:

1. Prospects can be added to a bucket upon import.

To add prospects directly from a bucket upon import, scroll down to add to a bucket and choose the bucket you want to add the prospects to.

(Note that if you want to update existing prospects through import, if the said prospects are in a different bucket, they will be moved to the new bucket you selected in the new import.) 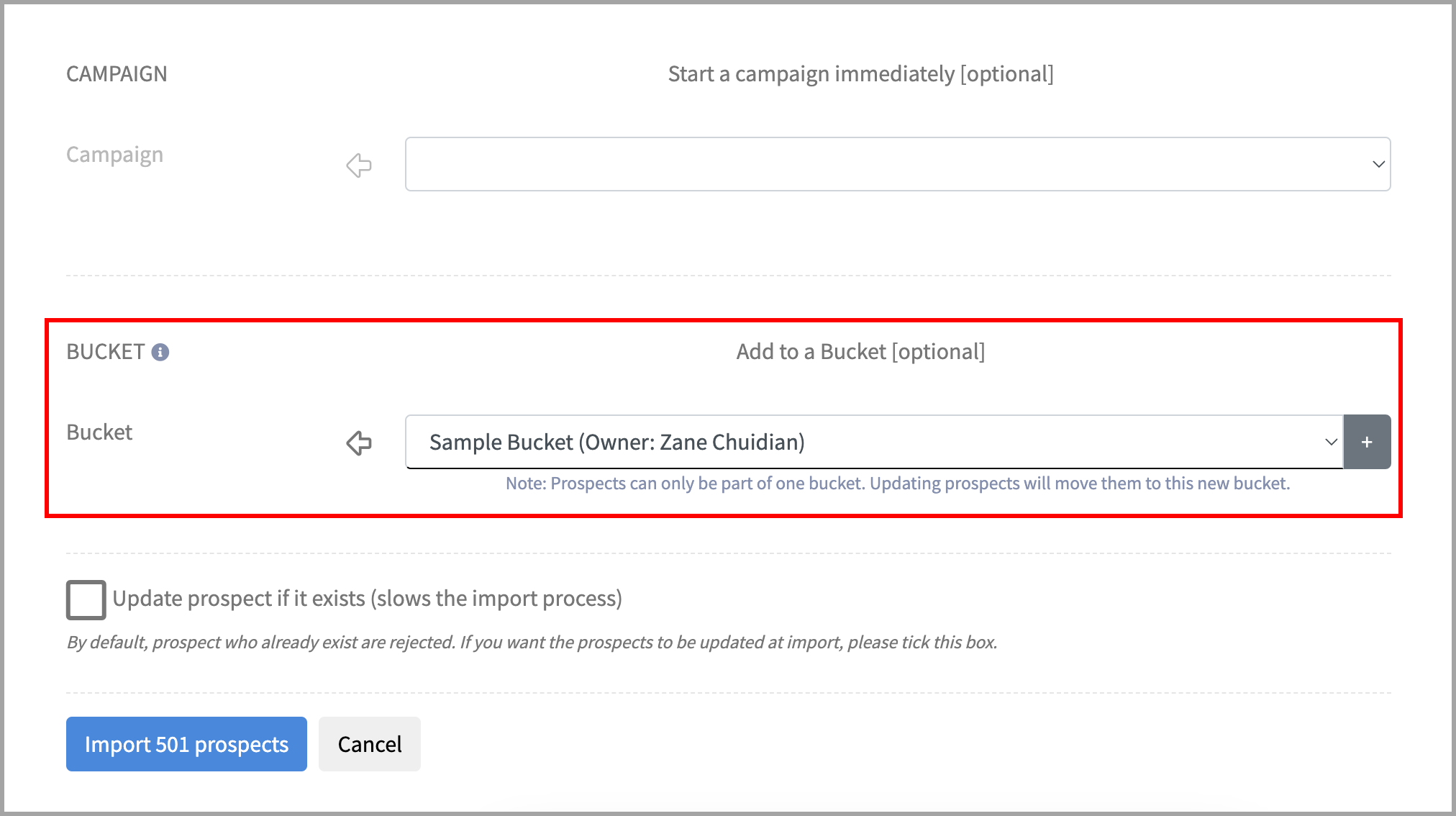 2. Prospects can also be added to a bucket manually.

To manually add a Prospect to a Bucket. Head to the Prospect List → select prospects → Action →Add to Bucket button → choose the Bucket you'd like them to go into. 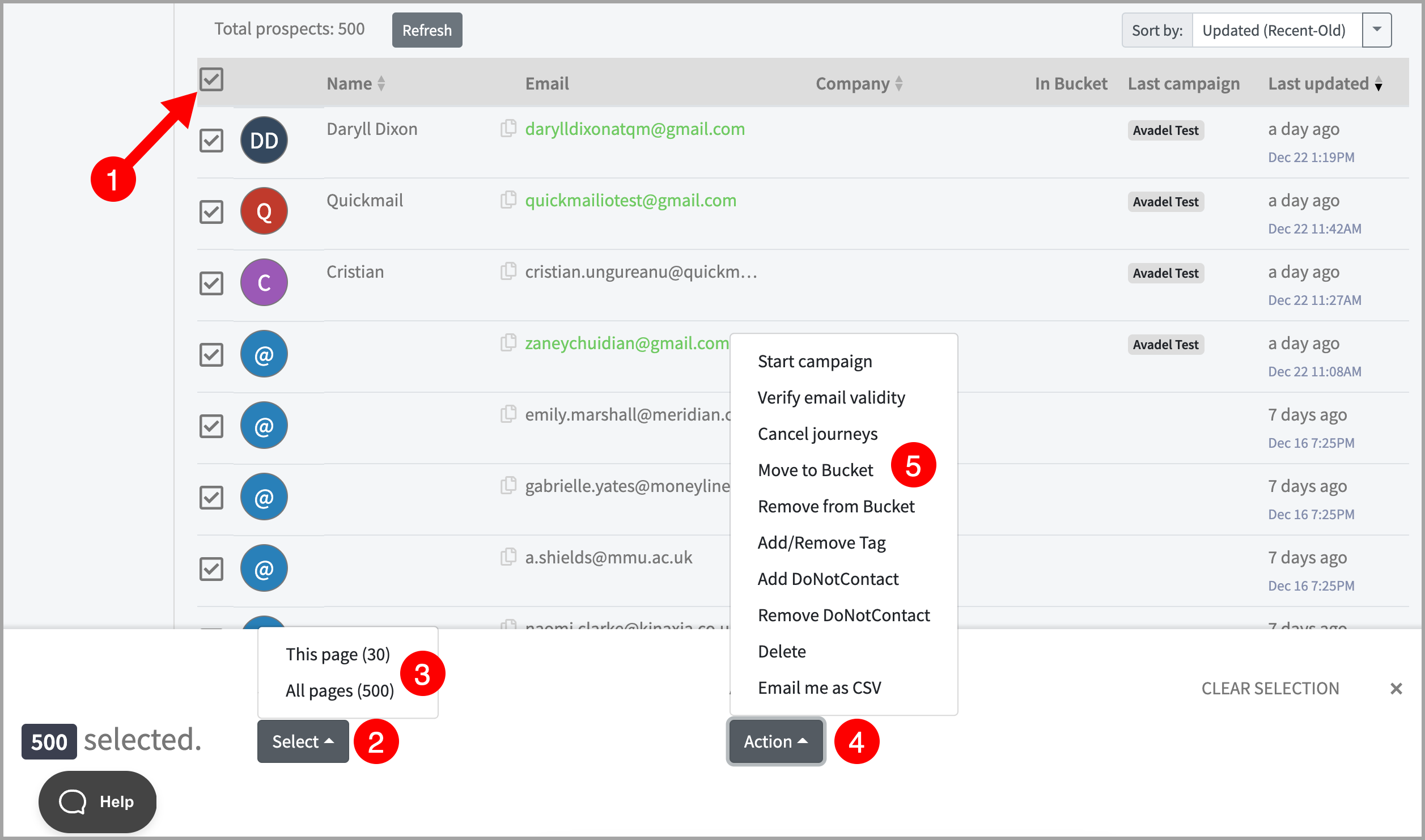