How to Schedule Campaigns

If you prefer video tutorials, check out this Youtube link: https://youtu.be/h9_1NJD-7hs

Sending tons of emails in one go raise spam suspicions, especially for new emails.
So to avoid spam suspicions, campaigns can be scheduled to send emails in batches.
Schedules work along buckets to automate adding prospects to campaigns on specific days and times of the week.
Setting up schedules and buckets saves you the hassle of adding batches of prospects to a campaign from time to time.

Without schedules, buckets are useless and vice-versa.

First, make sure that there are Prospects in a Bucket that you'd like to start on a Journey through a Campaign.
Check out this article for a step-by-step guide on creating buckets -- Buckets.
Next, head to the Campaign in question, and go to the Schedules tab, click Add Schedule. 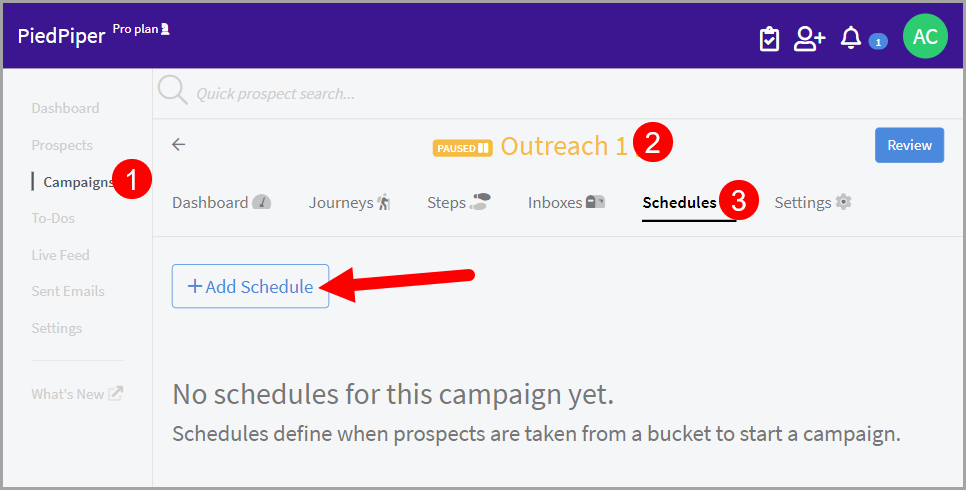 Create Schedules window will pop up.
Here's where to determine the Day(s) of the Week that the Schedule will run, the time of day it will execute, the time zone it will follow, the number of Prospects to pull out of the Bucket, and from which Bucket they'll come.

For example, here's the set-up for a Schedule that will run on weekdays at 8:00 AM (GMT+1), taking out 20 Prospects from the "Outreach 1" bucket each day. 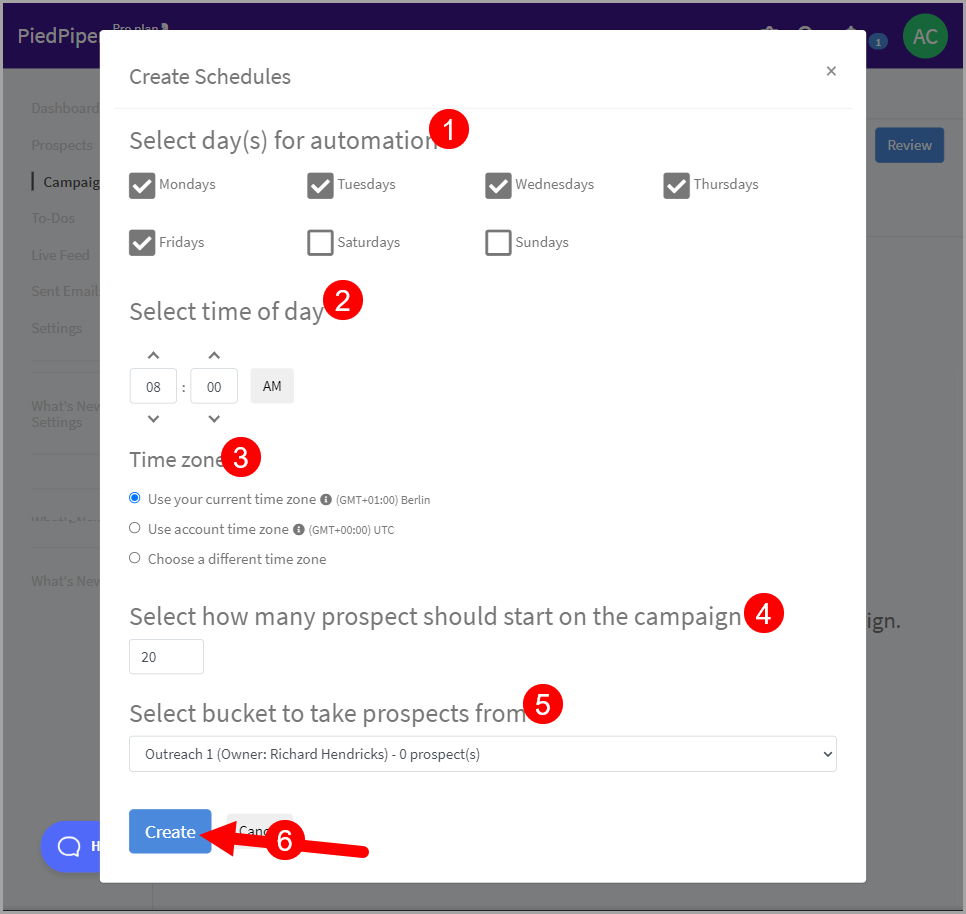 And that's it, at the next earliest schedule, the schedule will pull out prospects from the bucket and add them to the campaign.

Note: When creating schedules, make sure to give at least a 20-minute allowance from the current time. This is to make sure that the system will have enough time to detect the earliest schedule.

How to edit schedules?

Editing schedules can be helpful when you made a mistake in setting them up or if you need to adjust the volume of prospects getting added to the campaign daily.

The following are different ways and places to edit campaign schedules.

Editing from the campaign schedules page

After selecting all schedules, simply click the Action button and from here, you can choose to delete, edit times, and edit the number of prospects. 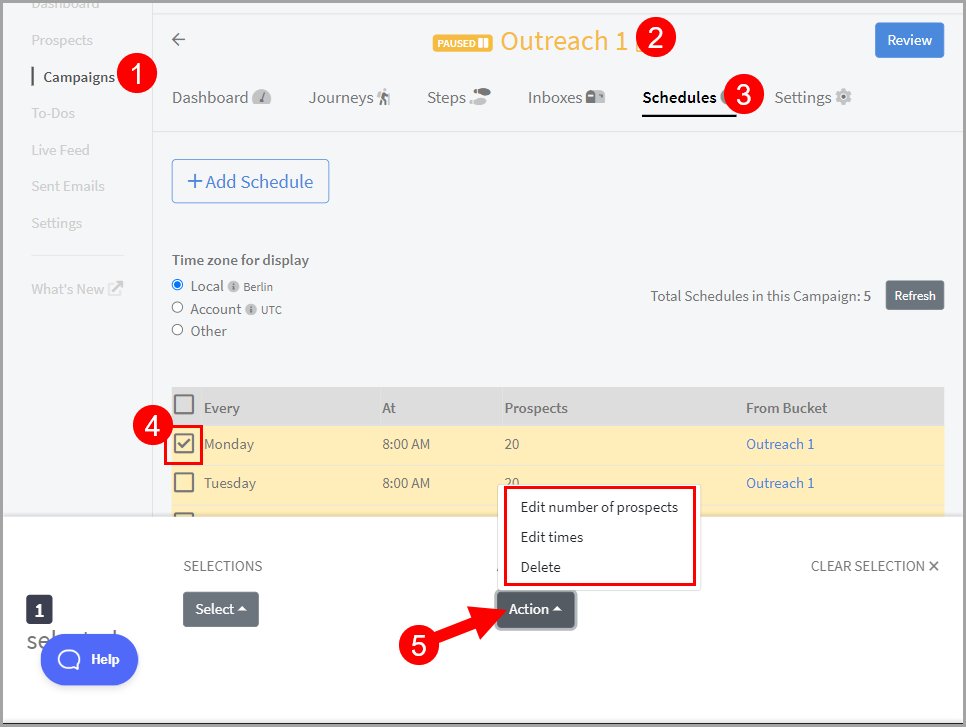 Bulk editing multiple campaign schedules from the all schedules page

If there's a need to bulk change schedules across all campaigns, simply access the all schedules list and edit from there. 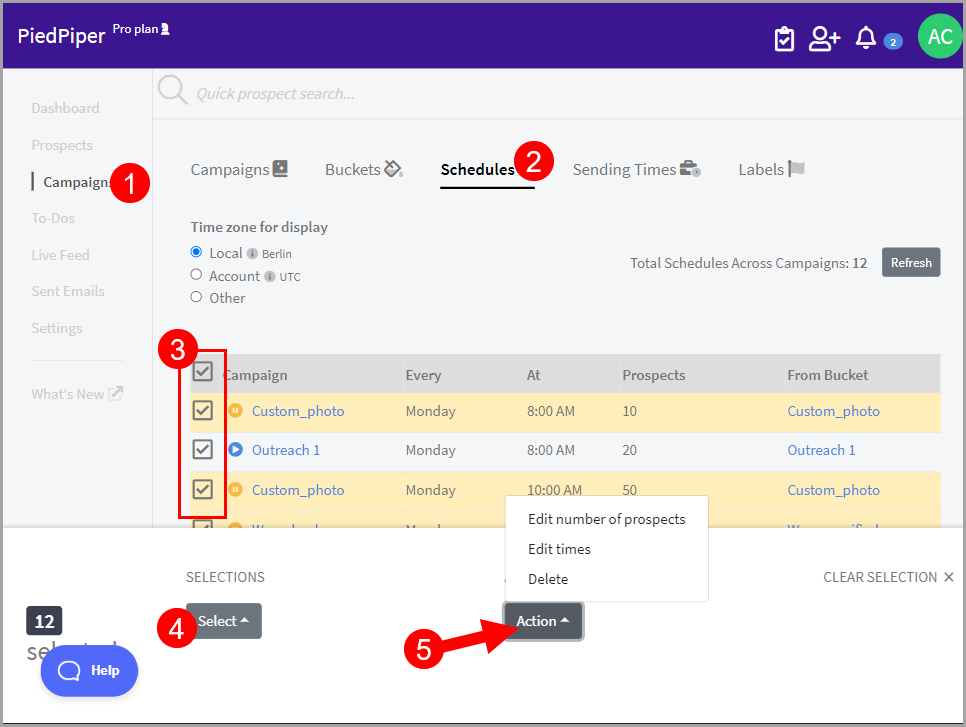 Changing the bucket assigned to schedules

At the moment, there's no option yet to change the bucket assigned to the schedule. 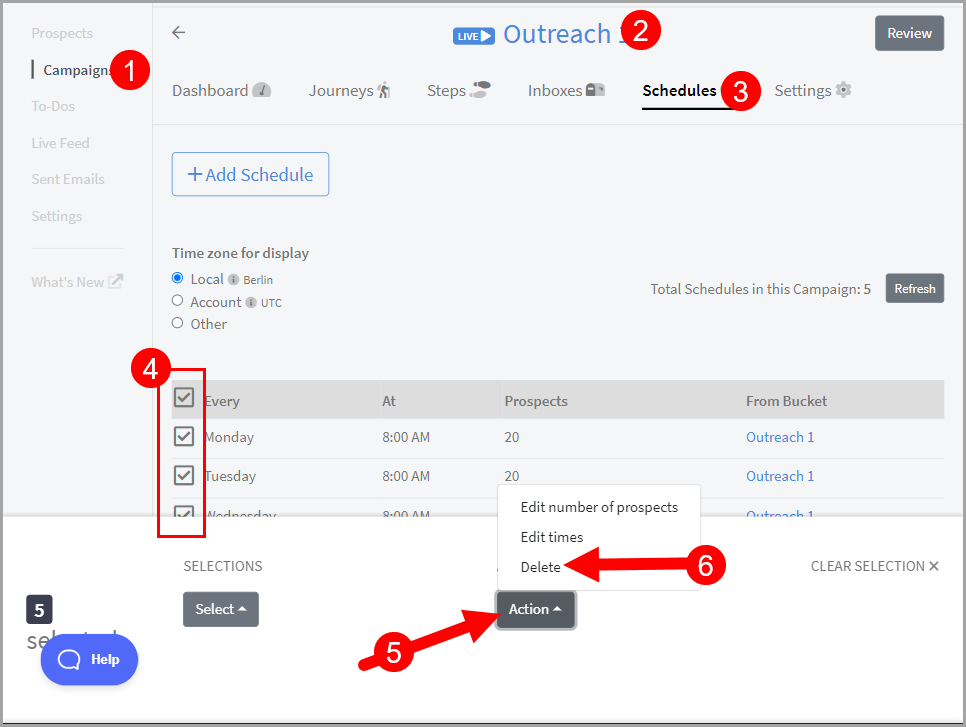 Pro tip: The schedule only control when prospects will be added to the campaign. The time when follow-ups will send out will depend on the wait step between email steps.
Additionally, if you want to control the time that the campaign is allowed to send emails, check out Sending times/Time tables.