How to Create a Campaign

How to Create a Campaign

A Campaign is a series of email messages, tasks, and other actions related to your Prospects called Steps. When a Prospect starts a Journey through a Campaign, they'll go through each Step until a Reply is detected.
Head to the Campaigns section of QuickMail, and use the Create New Campaign button. 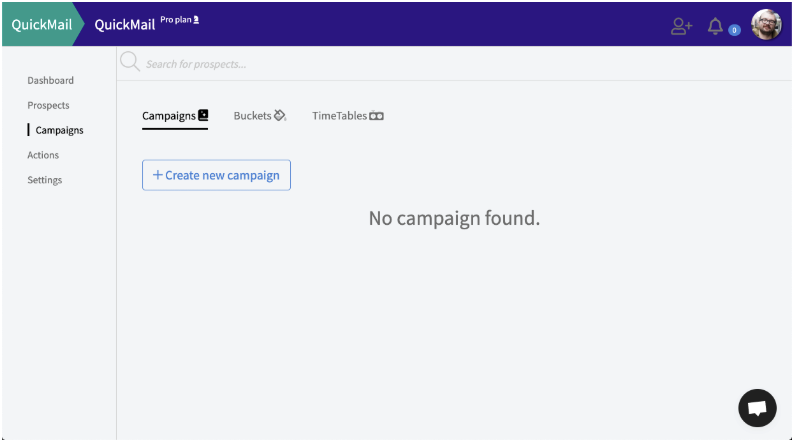 After clicking Create New Campaign, give the Campaign a name, and choose whether it's a private Sequence, just for you, or if it's to be shared amongst the whole team.

You'll be taken to the Steps section of the Campaign. This is where the Campaign itself will be created. To add a Step, click the + button. 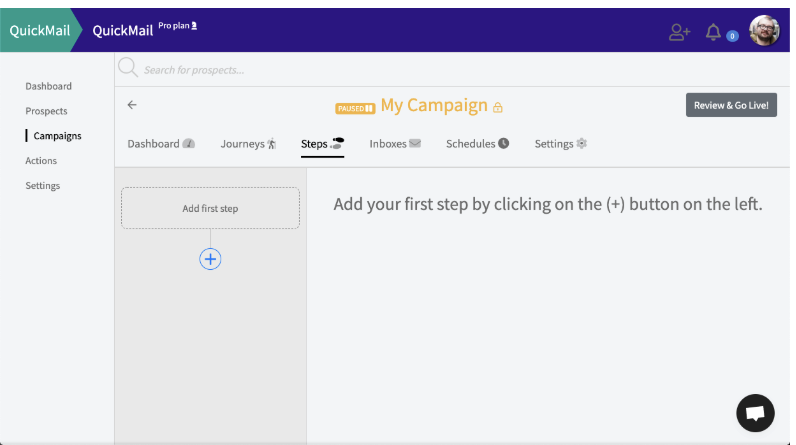 Then, choose what sort of Step should start the Campaign. 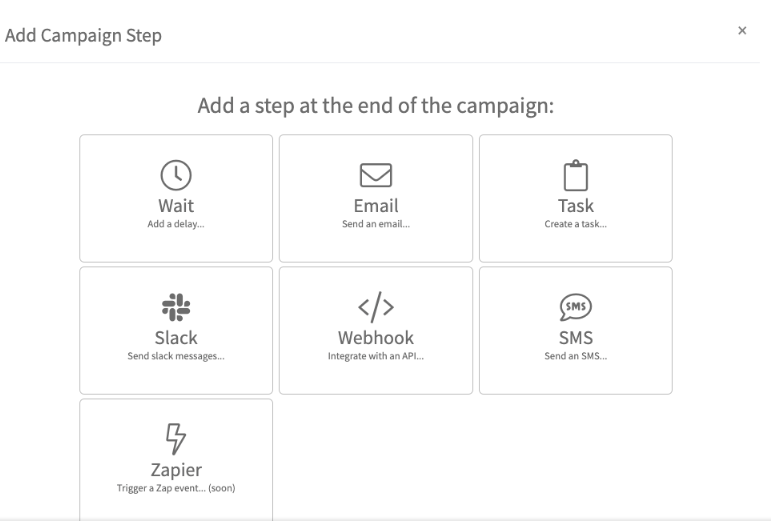 Let's choose an Email Step to send to Prospects. 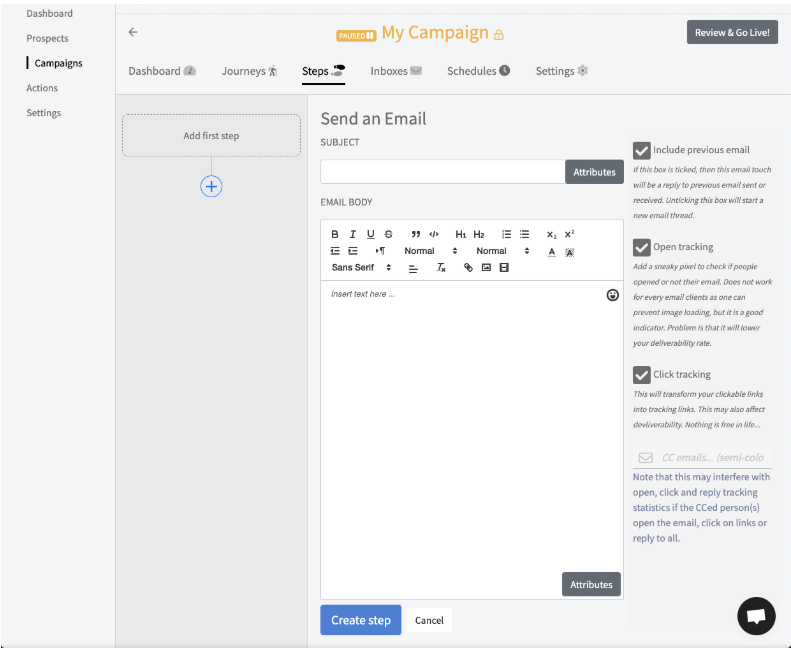 The Subject and Email Body are just what one would expect them to be.
The Attributes buttons will allow for inserting Prospect-specific information into the messages that QuickMail sends, to personalize them. 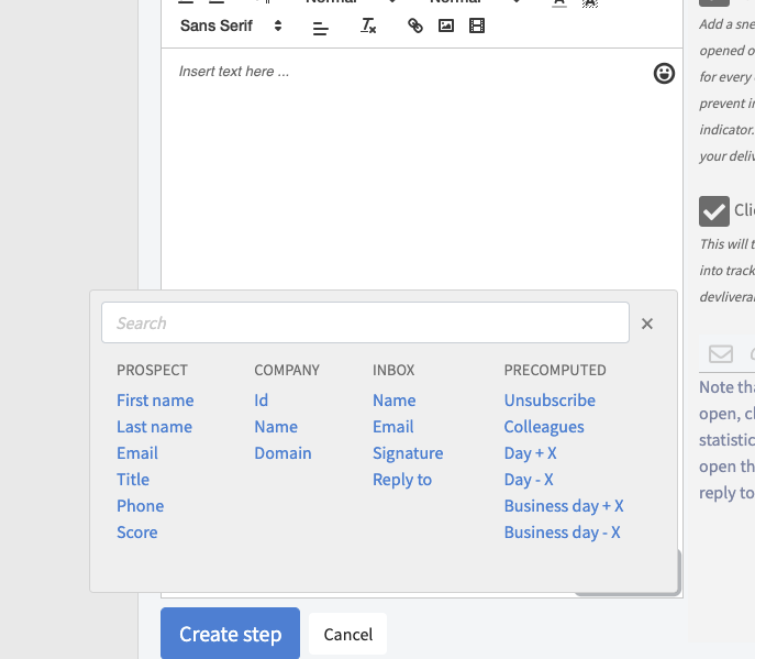 Here's an example of a message, using Attributes, that will be personalized for each Prospect. 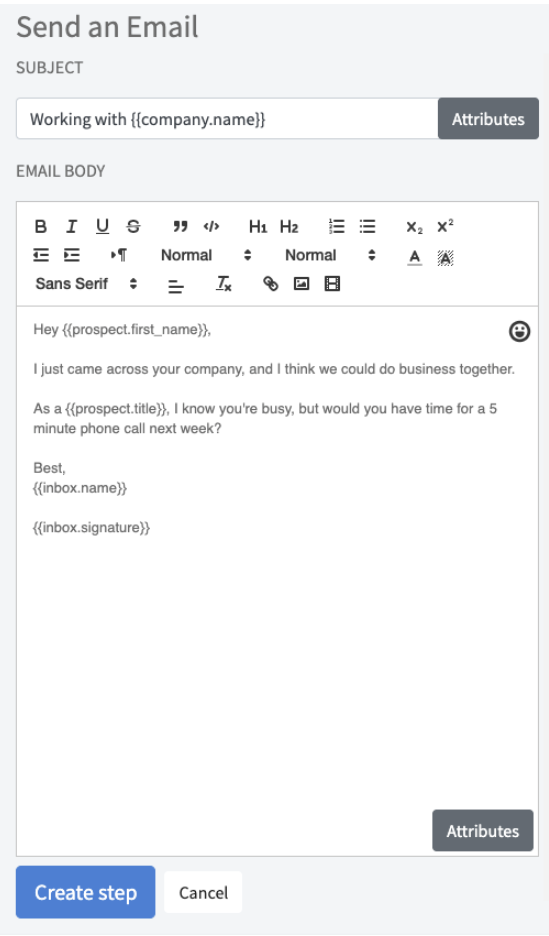 The Include Previous Email Checkbox, when checked for subsequent Steps, will include the previous emails sent to a Prospect as a quoted section of the message.
Open Tracking allows visibility on when and if Prospects have opened this message. It's done by including a small, invisible pixel to the message. It's not an exact science—some Spam filters will "open" messages on their own, and some email clients don't automatically load images—but it should give a sense of how the Campaign is doing.
Click Tracking allows visibility on when and if Prospects click on any links in the message. It's done by changing the link in your message to a Tracking Link, that will send Prospects to a server of ours for a brief moment (to track the click) and then on to their destination.

Finally, there's the option to include another email address to be CC'd on that message. Opens and Clicks will be tracked for the CC'd message as well, so do be careful!
Click Create Step, and that first Step will be saved!

Click the Plus button on the left side to add another Step. You can choose the amount of time for the Wait step in either Hours, Days, or Minutes. By default, a Wait Step is 3 days. 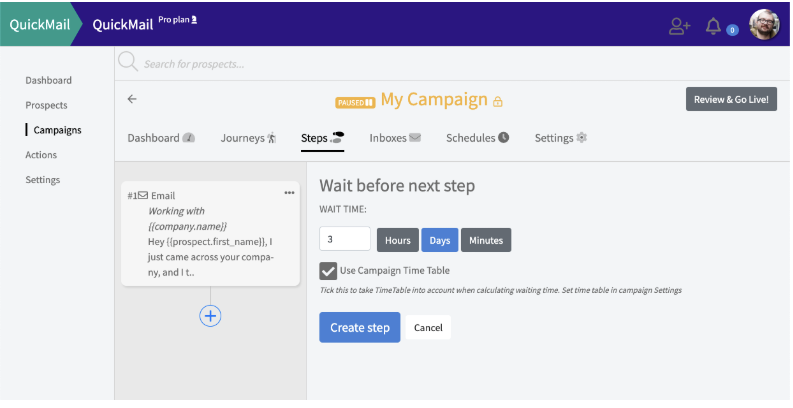 Additional email steps can be created, for Follow-Up messages to go to Prospects. Use the Plus button, and remember to include a Wait step.

Another sort of Step that can be created is a Task.
Tasks are internal to-do's for a team member to take care of, and do not send a message to a Prospect.
For instance, if a Prospect should get a phone call after 3 days, if they're not heard from by email, a Task can be a reminder to take care of that. 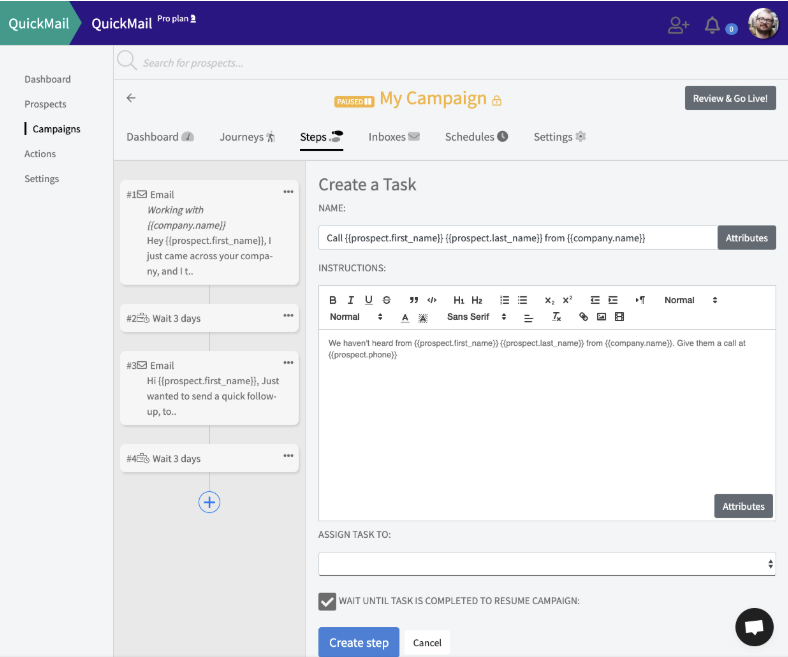 The Wait Until Task Is Completed To Resume Campaign will determine whether or not the Task needs to be completed before a Prospect moves on to subsequent Steps.

The Inboxes section of the Campaign will determine which Inbox and Identity will be used to send messages from that Campaign to Prospects.

If multiple Inboxes are selected, QuickMail will use Inbox Rotation, and send from each Inbox, to distribute the load.

Setting the Campaign to Go Live

Once the Steps are created, and Inbox(es) have been selected, it's time to put this Campaign into action. In the top-right corner, there's a grey button that says Review and Go Live!
This page will allow for review of the Steps that have been created, and the blue Go Live! button will tell QuickMail that you're ready to go! 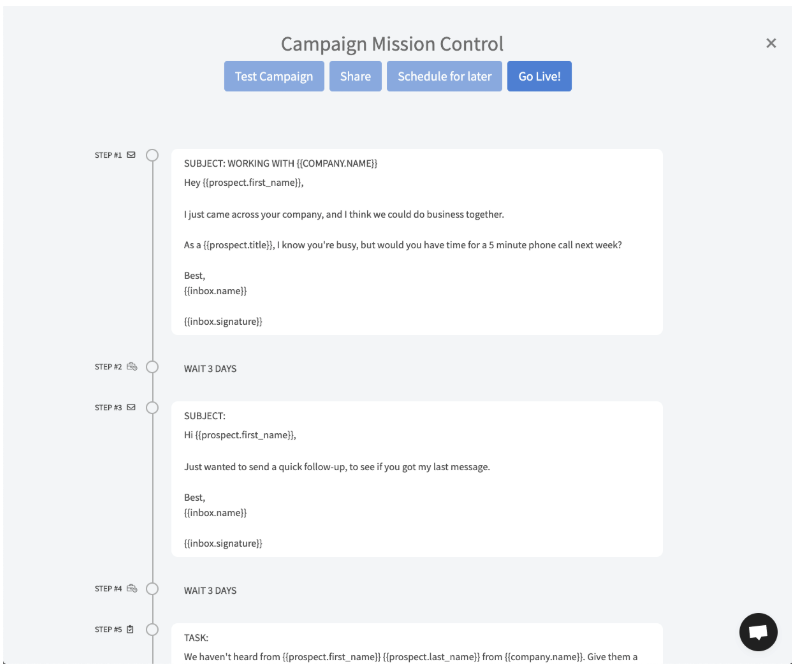