How to Start a Campaign

There are multiple ways of starting campaigns on prospects.
Depending on the volume and schedule, it's possible to start campaigns manually on one prospect or by bulk.
Prospects manually added to campaigns will start the campaign immediately.

Scheduling the start of campaigns is also possible and is the recommended set up for big lists. Setting up schedules will set a campaign to automatically take prospects from bucket/s and add them to the campaign at the specified time.

Listed below are the 5 ways to start Campaigns:

Starting a Prospect on a Campaign (One Prospect at a time)


You can view a prospect on the Prospect page (by clicking the prospect's icon) -> Click the 3 dots -> use the action start campaign. 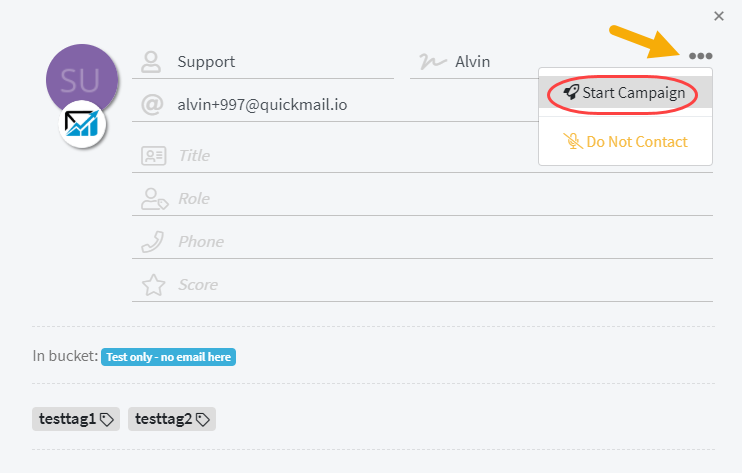 Note: Adding a prospect to a campaign will start their journey immediately. That means the prospect will receive an email right away if the first step of the campaign is an email step.

For a Prospect to receive emails from QuickMail, they'll need to be added to a Campaign. The most effective way of doing that is to use Buckets and Schedules, to automate the process, but there are times when Prospects may need to be started on a Campaign manually.
To do so, head to the Prospect List, select the Prospect(s) you'd like to start on a Campaign, and choose Start Campaign from the Actions menu.

Then, choose the Campaign they should start, and click Start Campaign

Automation is the key to a successful workflow. Instead of manually sending out each message from QuickMail, it's possible to set up Schedules for a Campaign, allowing it to do that work for you!
First up, make sure that there are Prospects in a Bucket that you'd like to start on a Journey through a Campaign.
Next, head to the Campaign in question, and go to the Schedules tab. 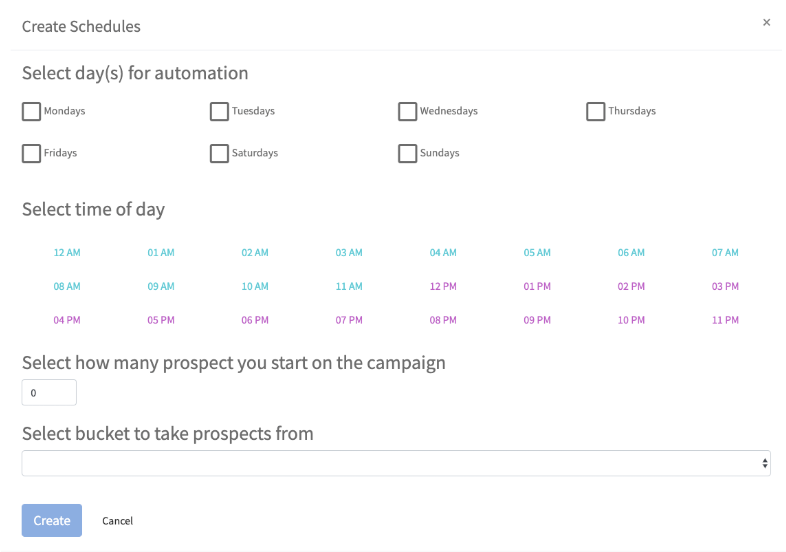 Here's where to determine the Day(s) of the Week that the Schedule will run, the time of day it will execute, the number of Prospects to pull out of the Bucket, and from which Bucket they'll come.
For example, here's the set-up for a Schedule that will run on weekdays at 9:00AM, with 20 Prospects from the October Prospects bucket. 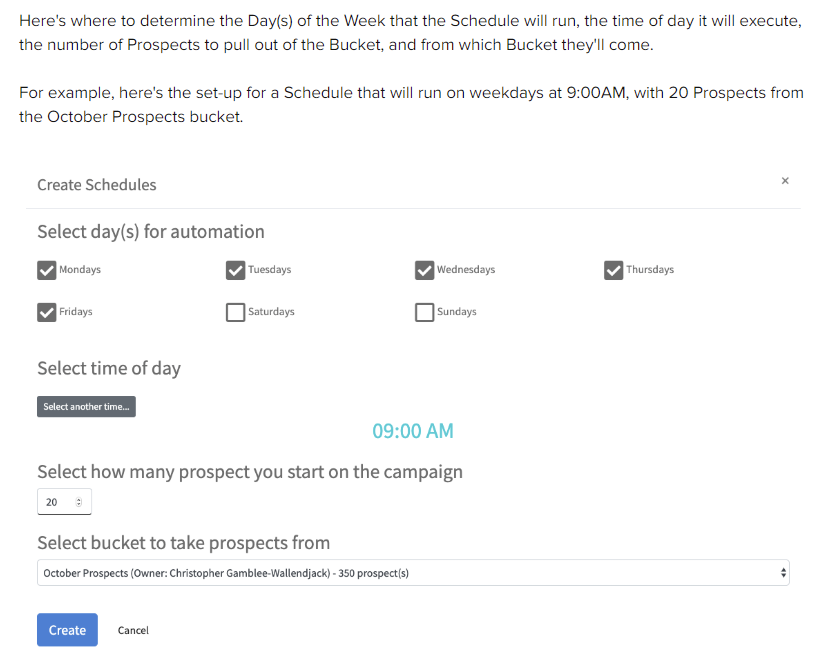 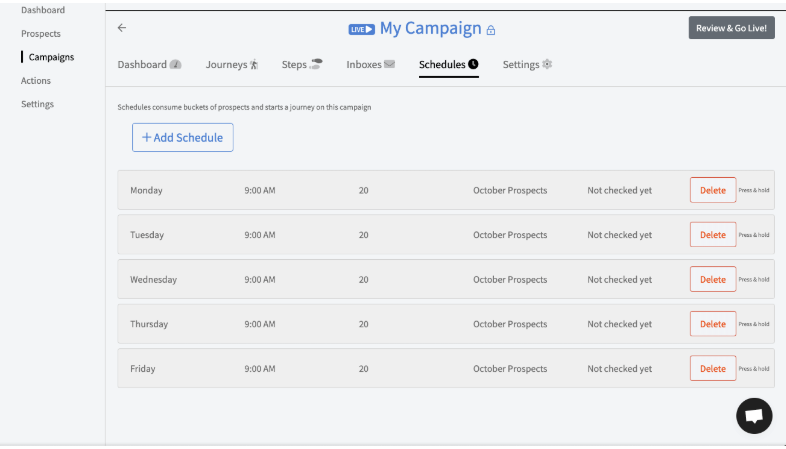 At the next designated time, QuickMail will start the appropriate number of Prospects on their Journey through the Campaign!

With Zapier, it's possible to automatically create prospects in QuickMail and add them to the campaign using the "Create or Update Prospect" action. 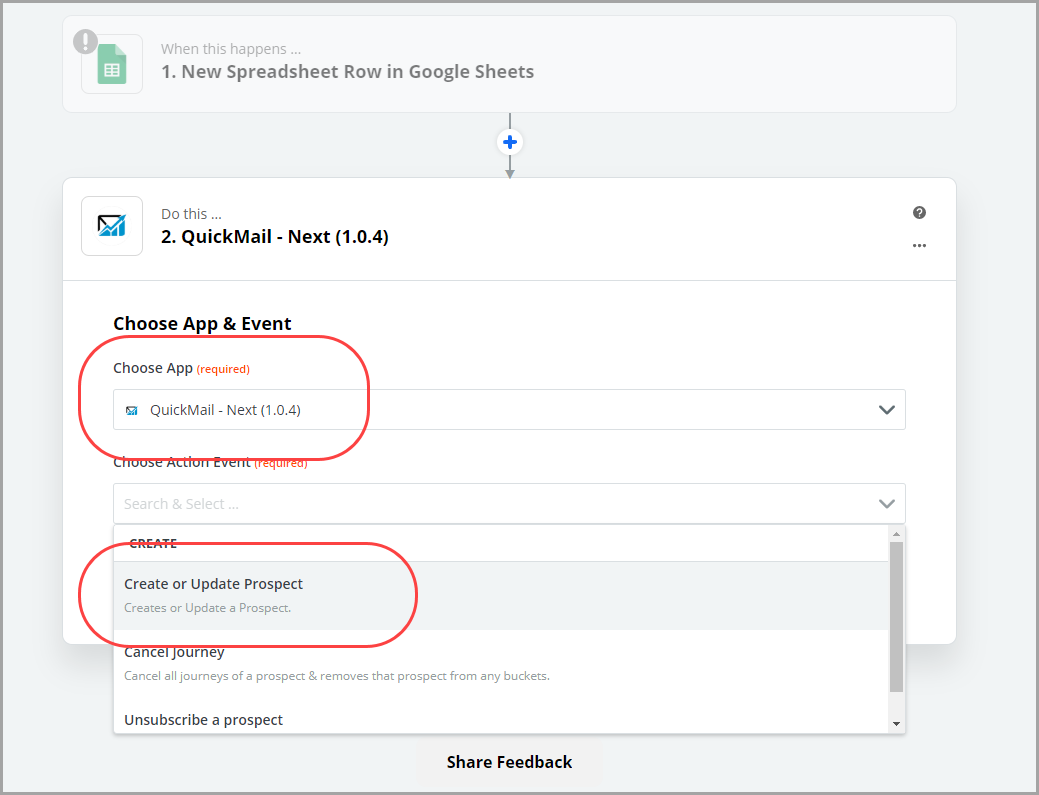 To set up Zapier integration, you can check this guide for more details - How to Use Zapier with QuickMail

Prospects can also be automatically from inbound emails. That means QuickMail will automatically create a new prospect when an email is detected in your inbox and the email sender is not on your list yet.

Note: QuickMail checks the inbox once every hour for replies.